Running Rampant: Ramp Suppers from the Library of Congress 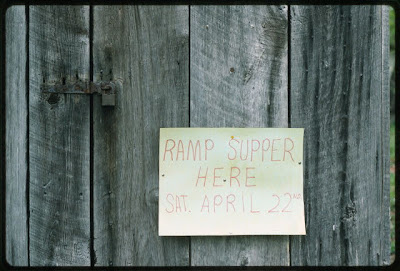 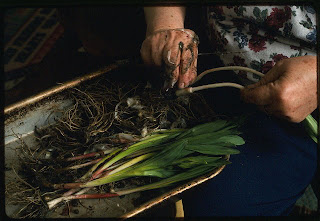 (Courtesy of the Library of Congress. Click on images for more information.)

If you live in New York, as I do, and frequent the kinds of restaurants that serve seasonal food, as I sometimes do, you can't escape ramps in May, even if you wanted to.

But there is a fascinating folklife/foodways component to ramps, as beautifully photographed and documented by the Library of Congress Folklife website.

Ramps are one of the first edible wild foods to grow in the Appalachia mountain region in spring, and to celebrate this annual rite, ramp suppers and festivals are organized throughout the area. 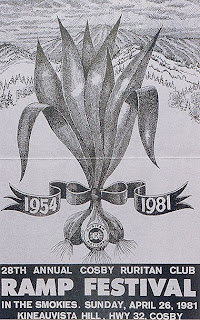 (American Folklife Center poster collection)
The oldest festival is said to be the Cosby Festival, which was founded in 1954 and takes place on Kineauvista Hill, near Cosby in East Tennessee. 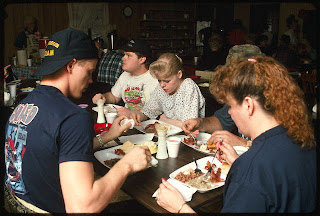 (Courtesy of Library of Congress)
And then there are the spring suppers at the Ramp House in Drews Creek, West Virginia where weeks before the supper is held, the community comes together to prepare for the big event. One of the most important jobs is to clean the ramps, and to do so, the women gather together in ramp circles. "The female camraderie on these evenings, pungent with the aroma of ramps, coffee, and sassafras tea, and punctuated with laughter, makes this an event in its own right," writes Mary Hufford in Folklife Center News (1998). 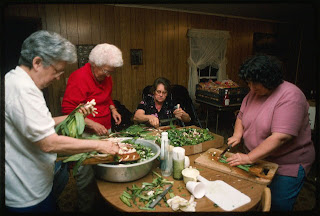 (Courtesy of the Library of Congress)
Hufford's piece is filled with fascinating anecdotes about ramps. They're higher in vitamin C than oranges, they're believed to thin and purify the blood, and "they satisfy the body's craving for living food at the end of a winter filled with produce that's been dried, canned, frozen, or shipped from faraway places."

Another interesting tidbit about ramps: The Menominee Indians referred to the smelly ramps as "pikwute sikakushia" which meant skunk. So they called a large ramp-filled Illinois land mass "shikako" which was then anglicezed to Chicago.

The ramp history in the United States is rich and deep, and I'll be thinking of those ramp circles the next time I buy a bunch from the farmer's market.

For Hufford's beautiful piece and more photographs of Ramp House Suppers in West Virginia, see the Library of Congress' "Ramp Suppers, Biodiversity, and the Integrity of 'The Mountains'."
Posted by   at 5/20/2010