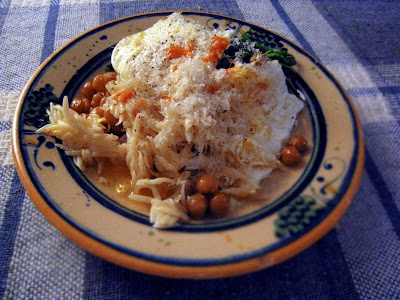 "I thought we'd do a catch-as-catch-can."

That was the occasional response to my daily dinner question, and it never failed to satisfy. What my mother was really saying was, "Whatever you find in the fridge or freezer or cupboard is yours, provided I don't have to do any cooking." My choice of dinner on those nights ranged from a bowl of Rice Krispies to canned corn and creamed spinach, to any leftovers for the taking.

In my, ahem, older age, catch-as-catch-can is more than a once a week dinner solution. In fact, I find that many of my weekday meals share some of the familiar catch-as-catch-can characteristics. Some may prefer to call takeout, but I still enjoy the challenge of scraping up bits and pieces and half containers, and making do with what I have around.

The meal pictured above was a recent catch-as-catch-can concoction. I took a can of chickpeas and roasted them in the oven with olive oil, salt, and pepper. While they roasted, I sauteed a bunch of dandelion greens in olive oil, garlic, and crushed red pepper. While they sauteed, I cooked up some orzo (my favorite catch-as-catch-can carbohydrate). And while the orzo cooked, I fried up some eggs.

On that delicious ensemble, I sprinkled some cheese, added a few drops of hot sauce, and made a meal of it. In fact, one could argue that the above example blurs the line between a planned meal and a catch-as-catch-can completely. Where does one end and the other begin? I would argue that anytime you put a fried egg over something (just for fun!), you're well on your way to catch-as-catch-canning it.

This has become my new cooking philosophy. Recipes and my cooking blog have gone out the window, but we're still eating some pretty good meals!

I love this style of eating too. We've really been making an effort to cut down on our waste, both from an environmental and global economic meltdown perspective. Here's example of a dish I concocted in exactly that spirit.