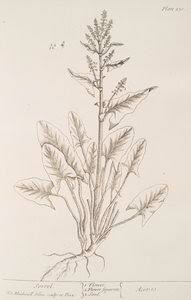 A relative of both rhubarb and buckwheat, sorrel is a sour, lemony green which, while delicious, is rather hard to find in a generic supermarket. I was thrilled to see it in my food coop this week and I hope it remains a constant throughout the summer. In my mind, with its flavor and consistency, sorrel is unlike any green around.

I experienced my first taste of sorrel only about two years ago at a friend's house in the Catskills. A bookstore nearby had sorrel growing wild (as it is wont to do) and my friend asked the bookstore's proprietor if he could take some. That night for dinner my friend - and excellent translator - Matvei served up a wildly flavorful soup of potatoes, sorrel, water, and sour cream called Schav (with a name like Matvei it's got to be Schav...). I couldn't get over how a soup so incredibly simple could produce such vivid, unique flavors. I became a sorrel convert quickly.

Last night I tried to reproduce Matvei's Schav as best as I could. And while it was pretty tasty - a bit sour, a bit acidic, with the shredded sorrel completely surrendering itself to the water making for a tasty broth - I still intend to fiddle around with other recipes as much as I can this summer. And from the looks of it, it won't be hard to find suitable candidates. So far I've found a titillating recipe in James Peterson's Splendid Soups which will most likely be the next sorrel recipe I try. Patricia Wells has a simple sorrel filling for omelettes in Bistro Cooking, and a search for sorrel in the New York Times database provides plenty of creative recipes to choose from.

I only wish sorrel was one of the 11 best foods we're apparently not eating, because then I'd be set till next year.

Yogurt, Spinach, and Sorrel Soup (Dovga - can be served either hot or cold)
(adapted from James Peterson's Splendid Soups)

Simmer broth in 4 quart pot. Whisk together yogurt and flour. Shred spinach and sorrel leaves into 1/8" ribbons. Whisk a cup of the broth into the yogurt mixture, then return the mixture to the rest of the broth. Add the rest of the ingredients and simmer for a minute. Garnish with a dollop of yogurt and either dill or chives.

Washing and dry the sorrel. Combine the sorrel and the butter in a large saucepan over low heat. Stir from time to time as sorrel begins to wilt. When most of its liquid has evaporated, stir in the crème fraîche and cook until all leaves are willed and it turns a dark green. Season with salt and pepper and serve.

Sorrel Mashed Potatoes
(first published in an article by Moira Hodgson in the NY Times on May 19, 1996)

Steam or boil the potatoes until tender. Meanwhile wash sorrel and cut the leaves into strips. Heat the butter in a frying pan and add sorrel. Stir for a few minutes over low heat until it has wilted. Add cream and heat through.

Mash the potatoes and stir in the sorrel puree. Season with salt and pepper.
Posted by   at 7/08/2008