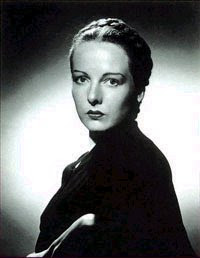 Mary Frances Kennedy Fisher was born on this day, a century ago, in Albion, Michigan. When she was three years old her family relocated to Whittier, California where her father edited a local newspaper. California remained a place close to Fisher's heart throughout her life. She would later write that although she was not born a Californian, " I truly think I am one."

She established a love of food early on. In her 1983 book As they were, Fisher reminisces about her first meal at a restaurant when she was six years old: "The small room lighted with candles behind pink lampshades, with incredible expanses of snow-white linen, and a forest of glasses sparkling everywhere...."

While at college at UCLA Mary Frances met Alfred Young Fisher. They married in 1929 and soon left for Dijon, France where Alfred was enrolled in university. Like countless culinary luminaries before and after her, M.F.K Fisher fell in love with France: the language, the culture and the deep appreciation of food. She took cooking lessons, and began to write seriously. After the Fisher's stay in Dijon, M.F.K and Alfred moved back to California where the couple became close friends with Dillwyn "Tim" Parrish. Parrish became something of a mentor to M.F.K and persuaded her to continue writing. Fisher's first book, Serve it forth was published in 1937 by Harper Brothers.

Fisher soon divorced Alfred, married Parrish and the couple moved to Vevey, Switzerland. Together they wrote a romantic novel under the pseudonym Victoria Berne called Touch and go (1939) (NYPL is one of the few libraries in the country that owns this book, and just try to find it online...). The marriage ended shortly thereafter when Parrish - suffering from Brueger's disease - killed himself.

Fisher would marry again, this time to literary agent Donald Friede, and she continued to write voraciously: Consider the oyster (1941), How to cook a wolf (1942), The gastronomical me (1943), Here let us feast (1946), as well as a translation of Brillat-Savarin's The physiology of taste (1949).

Fisher later wrote a column for the New Yorker, as well as a children's book, travelogues and novels.

The Library has a large number of her works, in addition to bibliographies of her other writings in magazines and newspapers. Molly O'Neill, in the Times obituary, refers to a documentary -- called simply M.F.K.-- as a "comprehensive view of Mrs. Fisher." The Library owns this as well, so I know what I'll be doing on my lunch hour today.

Fisher's papers are held at the Schlesinger Library and the finding aid is available online. NYPL also has a number of Fisher biographies in both the branches and the 42nd street building, and I highly recommend Joan Reardon's Poet of the appetites (2004) as a wonderful way to immerse yourself in the rich life of a woman whom W.H. Auden called "America's greatest writer."
Posted by   at 7/03/2008

Interesting, I did not know about he Victoria Berne book.