"BOSTON NOW SUPREME IN BASEBALL WORLD" read the front page of the Boston Globe on Thursday, October 17, 1912 after the Boston Red Sox beat the New York Giants in an eight game (one was a tie) World Series:


Words were never invented that could fully describe the outburst of insane enthusiasm that went thundering around Fenway Park yesterday afternoon as Steve Yerkes crossed the rubber with the winning run in the 10th inning.


Men hugged each other, women became hysterical, youths threw their caps in the air, one man in the bleachers fell in a dead faint, strong hearts lost a beat and started off again in double time.

In honor of this momentous occasion, F.H. Putnam, a Worcester-based silversmith or possibly a Boston-based druggist, hosted a dinner for the Members of the Boston American Baseball Club. This is the menu. 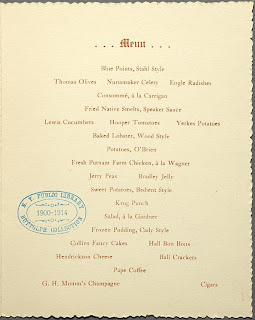 To read more about this fascinating, white-knuckle series, check out the Library's collection of digitized historical newspapers including the Boston Globe, whose illustrations, statistics, and detailed play-by-plays are a dream for any baseball historian or enthusiast.

Oops! Thanks for the correction.