The Night Before Cookbook 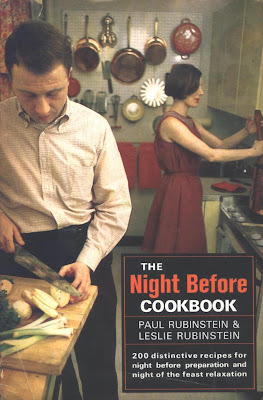 Who needs recipes when you've got a cover like this?

We've got a young, attractive couple (the authors, no less) in a real kitchen (their own), paying little attention to the camera as the husband (in 1967!) does the chopping in the foreground, and his beautiful wife stirs the contents of a copper pot in the background. Even the title, The Night Before Cookbook is sexy.

The authors, Paul and Leslie Rubinstein, presumably know their food. Paul, as his wife Leslie describes, "was not only born with a silver spoon in his mouth -- it was filled with pâté de foie gras." Indeed it probably was. Paul, after all, is the son of famed pianist Arthur Rubinstein and cookbook author Nela Rubinstein, whose cooking and book Nela's Cookbook, were so warmly described in Judith Jones' memoir The Tenth Muse.

But enough about his pedigree. And forget about the recipes. I'll just take the dust jacket.

After reading The Tenth Muse, I added all of the books she mentioned to my wish list. Now, I'm adding this book too. Thanks for the info!