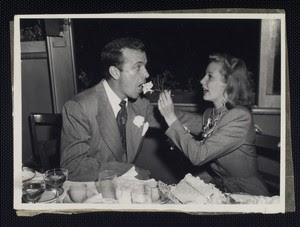 The Times beat me to the (celebratory) punch.

Just last Wednesday, as I was strolling through the stacks of the Library, my eyes landed on this interesting title: The Groom Boils and Stews: A Man's Cookbook for Men.

Cookbooks for men are alone a genre worthy of discussion, but since the New York Times today provides a highly agreeable list of cookbooks suitable for newlyweds, I'm opting to focus on the Groom part of the above title to see what other gems we have in our collection.

In searching for appropriate cookbooks in our online catalog I was somewhat surprised to learn that no subject heading exists for newlywed cookbooks. The closest subject category seems to be Cookery for Two which includes such titles as Cook'n to keep him and the less gendered - and much more appealing title -- Cuisine pour toi et moi.

But back to The Groom Boils and Stews where the first recipe is how to boil water and chapter one starts with "If you've been hooked into the great dragnet of matrimony, there are a few fundamental principals regarding the laws of self-preservation you should know."

Arguably it's not a promising beginning, yet believe it or not, once you get past the silly chapter introductions -- the dessert intro is a doozy -- many of the recipes are straightforward, practical, and dare I say, appetizing. Consider this recipe for Atomic Beets:

Drain and cube two cups of hot cooked beets. Melt one tablespoon of butter in a saucepan. Stir in two tablespoons of horseradish and add the cubed beets. Season with salt and serve steaming hot.

The Groom Boils is also one of the few cookbooks I've found in our collection catered specifically to the groom, that is, a married man sharing the household cooking responsibilities with his wife. Most of the other male-centered cookbooks I've seen simply target bachelors whose main goal is not to starve to death while waiting for the right cook, I mean wife.

Bridal cookbooks are a different story. Cookbooks, in general were often given to young women as gifts upon entering the "great dragnet of matrimony." Some of the more popular gift cookbooks included classics like Joy of Cooking, The Boston Cooking-School cook book, and The Settlement Cookbook , and despite their lack of an obvious "bride" label, there was no doubt as to who they were meant for.

Of the bridal-specific cookbooks, one of the most comprehensive I've found is Betty Wason's 1964 book Bride in the Kitchen. This all-encompassing volume includes wedding gift/kitchen supply suggestions, grocery saving tips, a meat buying guide, and most importantly -- for the groom, at least -- a chapter titled Desserts for a Sweet-Tooth Man.

But really, if you want my professional (and somewhat biased) opinion, just don't marry anyone that can't cook!

We don't have any actual newlywed cookbooks, but for our wedding we received Rose Bakery's Breakfast, Lunch, Tea, which has superb recipes for scones and tart crust.

That was a great post! I have never understood why men who can make beer can chicken on the grill find it impossible to cook once they come inside. One of life's great mysteries!